I caught this group of happy people yukking it up yesterday afternoon outside my office. They were laughing so much I had to go see what all the commotion was about. Can you tell what was so funny by looking at the picture? 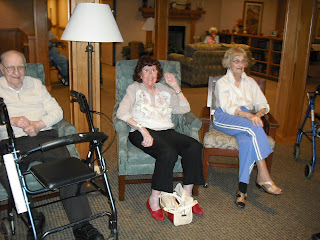 Joseph and Gladys were laughing at Lois (far right) because she was wearing one knee high panty hose and one black sock with her sandals. On accident, of course. Lois laughed right along with them. It was hilarious. Assistant then told them how I showed up to work one day wearing two different shoes (true story). They thought that was even funnier. I thought Gladys was going to pass out she was laughing so hard. Listening to three people with dementia laugh like there's no tomorrow is very high on the list of reasons I love this job.
As we were laughing, Little Miss Chatterbox wandered upon the scene interested in what the commotion was all about. She was, of course, wearing her lab coat (see, I don't make this stuff up!) , though I think it has been hemmed...which makes me wonder....who in the world would have hemmed a lab coat for an 89-year-old assisted living resident to gad about in?!? 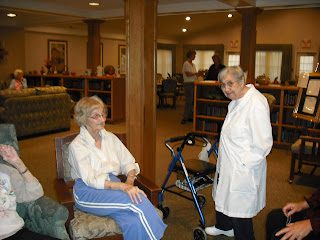 Happy Hump Day. It's been a fun week at the Ridge!

p.s. Speaking of Hump Day... when Assistant woke Joseph up the other morning he groggily looked at her and asked "Can you have kids?" She told him that no, she already had kids. "Then can I stick it in?" he very politely asked. HAHAHAHA!

Gladys just came to the office to report that Naomi had stolen her roll of toilet paper. "Isn't that just terrible?" she asked. "Stealing toilet paper! I declare, that's about as low as a person can get."

"Yes, stealing toilet paper is terrible, " I concurred, "but how do you know Naomi did it?"

Gladys didn't even hesitate before replying: "Well, maybe she didn't! I think you need to make a list of everyone with diarrhea and then you'll know who took it!"

Sounds like a good job for Assistant.
Posted by carrie at 2:59 PM 4 comments:

Zurich, Part One (and Photo Friday!)

I left Indianapolis on Monday, October 19th after being delayed for about an hour from our original departure time. We then sat on the tarmac for another 40 minutes before taking off. (Which I think totally sucks....why didn't they just leave us comfortably sitting at the gate?) Come to find out, we left Indianapolis late, sat on the tarmac for 40 minutes, and then circled Newark for 40 more minutes because apparently the vice-president was at the airport. I understand the need for security and all that....but how can one guy be responsible for me nearly missing an international connection when I had a 3½ hour lay-over built into my intinerary? BUT, why complain? All's well that ends well! I didn't miss my connection, I met up with my awesome Boss and we boarded the plane to Zurich about ten minutes later.

The woman sitting beside me on the Indianapolis to Newark leg was on her way to Romania, where she had been living for the past five years. She was an IU graduate who had majored in opera, when she decided she wanted a new life and relocated to Romania to work for an organization who helps orphans. Four years ago, she fell in love with an orphaned baby boy and is now going through the process to adopt him. In order to adopt a child in Romania, you have to first establish residency...which means you must live and work solely in that country for 60 months. That's SIXTY, not six. People have such amazing stories...and here is the "turn lemons into lemonade" segment of this speech...I would have never known this woman's story if we hadn't circled Newark for 40 minutes.

To say I felt like a pile of poo when we landed in Zurich is an understatement. I couldn't sleep on the flight, partially because I was excited but mostly because the guy across the aisle from me had the worst set of adenoids I've ever heard and I spent most of the nine hour flight fighting my gag reflex everytime he snored in a big loogie.

Upon making it to the hotel, taking a shower and drinking eleventy cups of coffee, I started coming around , so we took off on a walk down Bahnhofstrasse. Bahnhofstrasse is touted as one of the world's most exlusive and expensive shopping avenues. I just liked looking at all the watches and expensive chocolates! And I'm not sure it's all that exclusive, anyway....a quarter pounder by any other name is still....a quarter pounder. 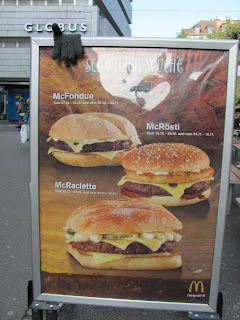 Later that night, we met up with our group for the first time for an outing on the fondueshiffe, or Fondue Boat. Uh, YUM. Seriously, what could be better than an entire dinner of cheese and bread? I was a happy, albeit tired, Hoosier girl. 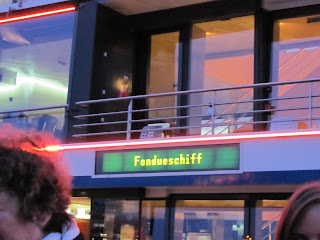 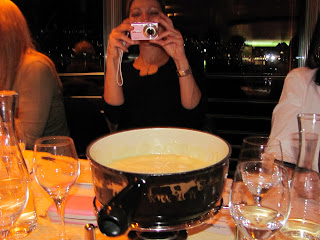 After taking the tram back to our hotel we were invited by two of our new Austrian friends for a "sleeping drink." At this point, I could have slept standing up, and I knew that a drink of any sort would be my total undoing...but how do you say no to one 6'4" Austrian woman and another Austrian woman who rolls her own cigarettes, both of whom you just met? Yeah, you don't! So the "sleeping drink" was actually grappa, and it was served by a German-speaking Indian man at a Thai restaurant. Think about that! Isn't that funny? Or was it just funny to me because I had been up for two days? Well, regardless, this German-Indian-Thai-guy poured us all grappa and everyone raised their glasses saying prost and I took my first sip. WOWZA!!! I didn't know it was legal to serve diesel fuel as an alcoholic beverage in Switzerland.

Even as bad as it tasted, I somehow managed to finish the "sleeping drink."

And then, before I even knew what was happening....I fell asleep at the table.

Because I have descended from a long line of Irish/Italian Catholic guilt, and I don't want to feel guilty about my big bro worrying about me, here's a a quick and generic post. I'm here and well. Except for a bad case of bronchitis, compliments of sharing airspace with 200 hacking, sniffling, sneezing people on the way home from Zurich.

The experience in Switzerland was incredible. I have much to write about, but first I must uncover my desk from ten days worth of neglect.