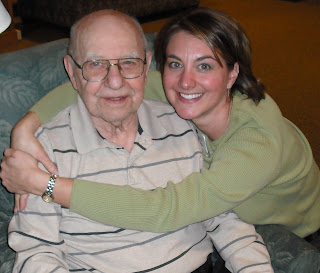 Happy last day of olympic-induced sleep deprivation!  I've been too darn tired to write anything with all the skis, skates, and hockey pucks sucking every last second of my time these past two weeks.
Anyway!

It's been a very long time since I had a photo Friday, plus I wanted an excuse to post this adorable picture of Joseph.  He's awesome. Even though he has dementia and often doesn't know where he is or why,  he told me a story recently about getting shot in World War II and his subsequent year-long stay in a German hospital. In great detail, I might add. He's an amazing person and the conversation reminded me how important it is that we listen to our elder's stories.

There is a proverb that says "every time an old person dies, a library burns to the ground." That couldn't be more true. Our old people have seen and experienced so many things that most of us cannot even fathom.  If you have an old person in your life...engage them in a conversation. Ask them about something from their past. Really listen to them. Not only will you make their day, but you'll learn something, too.

p.s. Record your conversations. It's the cheapest priceless keepsake you could ever have.
Posted by carrie at 9:46 AM 4 comments:

Since I typically write about job humor, I don't think I've ever discussed the fact that I have an absurd knack for finding myself in strange situations. It's true, and happens far more often than is even reasonable to believe. I'm talking about weird things like finding myself in someone else's bed & breakfast bathroom with a 60ish year old woman who is wearing only a bra. Or the time I went running with a peer and asked her if she had a boyfriend after she has courteously asked me about my husband.  Apparently I was the only one in the world who didn't know she was gay, not that I care, but that whole boyfriend question? Yeah, awkward.  Another time a young woman came to my office (when I worked at a hospital), sharing the woes of her life while trying to leave her baby with me while she went to work. Oh! Then there was the time I was working out and some lady I had never met started exercising beside me. She didn't even introduce herself, but proceeded to tell me that she was recently divorced and that she had put up with a lot of things from that jerk, but as soon as he started looking at their 12-year-old daughter naked she packed up and got out.

I've decided I must have one of those faces that makes people want to vomit their life's story on me. Just now a visiting nurse stopped in my office to say hello. I've met her one other time for maybe one minute. I made the mistake of asking "how are you?"  Here is her answer...the abridged edition.

"You know, I'm actually really great although I've been really watching my blood pressure because it's been elevated. I'm the only woman in my family not on high blood pressure medication, and I just want to figure out a way to control it without the pharmaceuticals. Hormones might have something to do with it, but thank God I should be over with that soon! I'm on month five of no period, but of course you have to go an entire year before they'll consider you post-menopausal. God, I can't wait.  Back in the 80s I had such terrible PMS, and you know that was before PMS was medically recognized, and when it finally was I felt so validated! Finally I had an answer to why I had tried to kill myself so many times. But that last time when I was pregnant and almost killed my baby, I told God, if you give me a healthy baby I'll never try to kill myself again. But then I got stuck in peri-menopause, which is like PMS only it's worse and lasts longer, so I nearly renigged.  I was only having 4-5 good days out of every month, but thankfully I got sober and that program has been tremendous in helping me cope and now I just can't wait to have the whole hormone mess behind me.  That and losing about 40 pounds just might keep me off the hypertension drugs!"

Yup. I must have one of those faces, alright.
Posted by carrie at 4:10 PM 5 comments:

Labels: i can't make this stuff up

I love afternoons at Rock Ridge. A group of residents (lovingly referred to as The Peanut Gallery—what else?) assembles outside my office for some conversation and fellowship. I try hard to stay focused on my work…really I do…but sometimes the conversation is simply too much to ignore. Take today for instance. Lois (of the mismatched socks) was doing a little griping about the fact there aren’t enough “good” people living here. Gladys jumped right in and corrected her. “Oh no, we have plenty of good people here. Everyone has mostly good in them! It’s just that sometimes things in life happen and they don’t want to push that part out.” Gladys has such a great life philosophy, even if her wording is a little questionable.

From there, the conversation turned to wine.( Lois thinks that we should serve wine with dinner). She told Gladys how much she would enjoy drinking a glass of wine from time to time if only someone would join her. Gladys said she never much of a wine drinker, but she did like “a little taste of other things from time to time.” (Of course by now, I’ve given up all attempts of work and am straining to hear better.) Lois said “I never like to drink that hard stuff unless I’m home and have a man with me who likes the same thing.” HAHAHAHAHA!!! Gladys immediately starts laughing. Lois is flustered and protests “that didn’t really come out right,” to which Gladys quickly replied “No, it never does in those situations!” I’m convinced she is the quickest witted Alzheimer’s patient who ever existed.

The topic changed again--which it does quite often when you have two people with Alzheimer’s chatting--and Lois proclaimed the best thing about being her age is “knowing Jesus better.” Apparently still not forgetting the earlier part of the conversation, Gladys piped right in with a hearty laugh and “I’m guessing Jesus doesn’t know you nearly as well as we do!”

It is baffling that Gladys could spout her wit like that, but just prior to that she told the exact same story four times…and Lois listened to it four times… as though it were the only time she’d ever heard it. They were both so fully present in that conversation at that instant… I almost forgot they have Alzheimer’s.

During a moment like that, the work can certainly wait.
Posted by carrie at 5:10 PM 5 comments: