Much has been going on administrative-wise, which basically means I've had a really boring office job lately. Luckily I have Gladys to break up the monotony. She had a dream the other night that one of the Workerbees told her she stunk. When she woke up, she thought it had really happened and was she ever upset. I consoled her and assured her it was a dream. Before she left the office, she got up close and whispered "Could you smell me, just to make sure?"
Running. I've run twice this week and plan to go 7 tomorrow. I'm finally back on the wagon.
Photo Friday. Today is the 15th anniversary of the closing of our house. We moved in the very next day...and have been working on it ever since! We've re-wired, re-plumbed, remodeled, knocked out walls, built a deck, put on new siding, fixed the roof, replaced every window, and have loved every minute. The photo is a picture of a painting of our happy house. I had a local artist paint it for Hubby as a Christmas gift a few years ago. The landscape has changed since then (it's much better), but I still love the painting.
And the house. 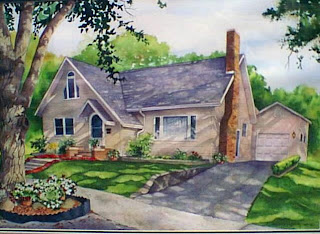 I've been in a meeting this afternoon and just returned to my office. This is sitting on my conference table. No note. No explanation. No idea.

This place is so weird. 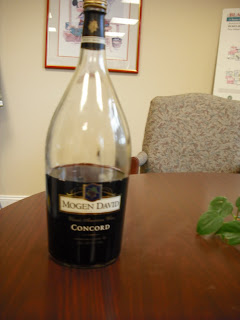 Labels: i guess it's wine-thirty at the ridge, it could have at least been something good, wonder who drank half the bottle

Back in April when we were in Boston for the marathon I had a delightful conversation with another runner at a bar. (We are now considered the founding members of the Apres Expo Dr

inking Club. Hopefully we will reunite next April, so if anyone would like to consider membership in this exclusive club just drop me a line.) Part of our conversation was a discussion based on the number of tooth "pik" flosser thingies we see on the street while on a run. Seriously, those little suckers are everywhere! Everytime I see one, I think of Moe in Boston and ponder exactly why it is that someone obsessed with their oral hygeine wouldn't also be a little concerned with the earth's hygeine and take the time to throw their gross little tooth pik into the freaking trash instead of on the ground. But I digress.

I do 99.9% of my running on a trail, so I rarely run on the street anymore. I did, however, take off running from home last week because I was short on time and needed to get one in. I had forgotten how entertaining running on the street can be! Not only did I see two tooth piks and the normal trash one would expect (I HATE litterbugs!), but also a CD, one pink knock-off-brand Croc, money, a shirt, a cassette case, a smashed GI Joe guy, and a glove. How does stuff like that get on the street anyway? One shoe? Seriously? What about the shirt? How does such random stuff like that get on the side of a street? Am I weird for wondering?

One little guy with dementia (who is so sweet he gives me a tooth-ache) woke up really disoriented this morning. When WorkerBee suggested he get up and go to the bathroom, he sighed and said: "All right. If you want to hold it, you can."
~~~
I hate wearing shoes, and usually kick them off under my desk. Yesterday, as I flounced through the lobby in my bare feet, Garnet remarked that I was "Better Foot." "Do you mean barefoot," I asked? "Nope. I mean Better Foot. My kids used to call it that...and if you think about it, it really is better." Agreed! I love it.
~~~
Gladys thinks that Naomi* has stolen her vacuum (every single day) and she keeps coming to my office to "report" it. She gets really upset...which is one of the reasons her quick wit always catches me off guard. The last time she came to tell me about it I promised her I would contact Naomi's family and get the vacuum back for her. Gladys responded with "That's so very nice of you, but I think the whole situation sucks." I laughed all afternoon.
~~~
*still dead
Posted by carrie at 8:46 AM 5 comments:

Freddie just told me he liked it when I wear dresses. "You do?" I asked.

"Oh, yes. I can see your legs A LOT better. " Almost inaudibly and with an ornery twinkle in his eye he added, "And I like to look at them."


~~~~~
Running! I went twice so far this week, with a five-miler planned for tomorrow. Yippee!


~~~~~
Photo Friday! A couple of goodies from our Circus Week celebration at the Ridge. Who has more fun than old people? 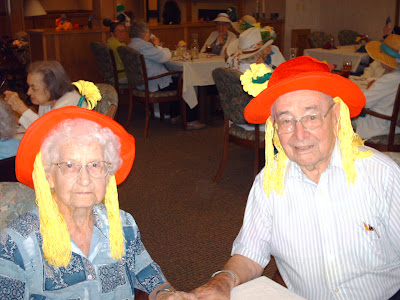 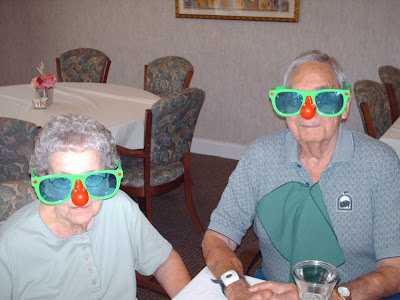 Happy Weekending!
Posted by carrie at 11:33 AM 5 comments:

Labels: photo fun, who is cuter than freddie?

I'm really not too superstitious or into astrology...but I do have to admit that there is something to that full moon stuff. We've had a special kind of crazy going on the past few days. Like residents asking us to help them "get their bowels out," or confused residents talking about how confused other residents are, or the guy who showed up to supper soaking wet and acted like he didn't even notice. Oh, and how can I forget the potential resident whom I met for the first time this week? I knew her for five whole minutes when she proceeded to tell me all about the man she was married to for 20 years before he decided "he liked the boys," and continued to refer to him as "the queer" for the rest of the conversation. Oy.

Then we have Little Miss Chatterbox, who has taken to wearing the lab coat daily. I heard someone ask her if she was a pharmacist. (They were serious.) Gladys thinks Naomi has been taking her teabags while she's out of the apartment. 98-year-old Maude tripped and fell. Before I could even ask if she was alright she threw her cane and purse and yelled "Damn it all to hell." Apparently she was still mad later. She dumped her salad on the table at lunch because the man she was sitting with didn't want one. I guess she doesn't like eating alone? There's more, but I need to cut it short because I can hear Joseph coming (his walker wheel has a distinct squeak) and he's going to want to know about mass. Again.

Here's my Friday Photo! I'm eight years old, and on the left (as you look at the screen, Big Bro. Or the right, if you turn your back to it. Geez.) I ran twice this week. Next week will be even better. Happy weekending!
Posted by carrie at 9:10 AM 5 comments:

Freddie's daughter picked him up for a doctor's appointment a little bit ago. As they were preparing to leave, the daughter (who treats 97-year-old Freddie way too much like a child, in my opinion) asked him if he should wear a brief. "We have a half-hour car ride, Daddy. What if you have an accident?"

In a tone that I surmise is caused by the exhaustion that accompanies years of being babied by the daughter, Freddie replied: "Well, then you can roll down the window, plug your nose, and I'll stick my ass out the window."

Labels: who is cuter than freddie?

Gladys told me that she thinks Joseph is "failing."

"Why do you think that, Gladys?"

"Because he is really confused today. Do you think he could have Alzheimer's* or something?" she asked. Gladys is so damn cute it hurts. I hope someday, if the plaques and tangles attack my brain, that I am just like her.

*Gladys has a confirmed diagnosis of Alzheimer's Disease. She is the one and only reason I might wish to be 18 again...simply because this time around I wouldn't mess with the Journalism, er, I mean English, oh wait, I mean Speech Communication majors. Instead, I would study brain science. Alzheimer's is equally fascinating and frightening...and it is incredible to witness how the disease manifests in people with different personality types.

How can someone who just ran a marathon six weeks ago already be so out of shape?
Posted by carrie at 3:58 PM 9 comments:

I love Kara Goucher. She is to running what Tiger Woods is to golf, or maybe even what Michael 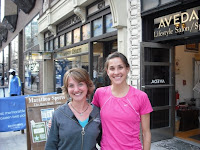 Jordan was to basketball...but if you were to run into Kara (like on the street in Boston!) she would stand there and talk to you. I can't think of any other sport where an elite athlete...the best of the

best...would take the time to chat and take a picture. Besides being a quality person, she's also a workhorse. 120 miles a week! That's more than I've ever managed in an entire month.

Finally. I have found the inspiration today to actually go for a run.

(She even beat all the boys yesterday!)

More than 14,400 runners rocked while Kara Goucher rolled at the inaugural Chicago Rock and Roll Half Marathon on Sunday. Goucher, who is running 120 miles per week in preparation for the Aug. 23 IAAF World Championship marathon in Berlin, won the rac outright in 1 hour, 8 minutes, 5 seconds.

Goucher passed the last of the male challengers with more than two miles to go and ran alone to the finish. The race didn't offer prize money and Goucher, who was the focus of "Kara Cam" throughout the race, was the lone headliner.
"It was fantastic," Goucher said. "(Race organizers) kept me very busy but the people here were so friendly."
Goucher threw out the first pitch at a White Sox game on Saturday and used the half marathon as a training exercise. She gave chase to Deena Kastor's U.S. record of 1:07:34, but really wasn't focused on her finishing time.
"I thought I could run 5:12 (per mile) for the first half and 5:08 for the second half and then with a big kick maybe I could get (the record)," she said.Goucher, and her husband, Adam, were booked to fly out of Chicago Sunday evening for Europe. They will join other Nike athletes at training camp in St. Moritz, Switzerland.
How focused is Goucher's training? When her flight to Chicago was delayed by three hours last Thursday, she went to the Nike store located inside the Portland airport, picked up shoes and running clothes, and did a 40-minute run along Airport Way so that she didn't waste the extra time in the terminal.
In Chicago, where bands played at different points on the course, Goucher intended to use the race as a rehearsal for Berlin. But really, it was a vastly different sort of event.
"It's really nothing like Berlin," Goucher said. "People were talking to me until the fun went off."
But it became a chance to have fun and be a role model.
"There were a lot of young girls in the race, so it was nice to make a girl-power statement," Goucher said. "And all of the guys were very gracious."
Her next race will be much more serious, and Goucher believes she can be a factor in the outcome.
"I believe I wouldn't be running the marathon (in Berlin) if I didn't have a shot," she said. "If I run fully committed, I do have a shot."
Posted by carrie at 10:13 AM 8 comments: