This is Getting Ridiculous

Two brand new boxes of kleenex. Gone.
Posted by carrie at 11:27 AM 2 comments:

Labels: i'm thinking about setting up a security camera, mystery at the ridge, the hell with nancy drew...i need miss marple

1. I went to a Doobie Brothers concert last night.*

*"I want to hear some funky dixieland, pretty mama gonna take me by the hand...by the hand hand...take me by the hand pretty mama...." So I knew more words to more songs than I should probably admit. Everyone in the audience looked...well, old....so it was a great relief to discover (when I googled it this morning) that the Doobies actually started performing before I was born. Whew.

**Obviously I'm no Nancy Drew. Game back on, snack stealers.
Posted by carrie at 2:46 PM 2 comments:

Labels: i love concerts, mystery at the ridge

Well, the mystery is solved. I don't like being Nancy Drew nearly as much as I always dreamed I would...but then of course her mysteries always had something really cool like an old clock or a hidden stairway. My mystery had missing snacks and cups.

Yes, cups. An entire sleeve of styrofoam cups went missing yesterday afternoon, too. And then later in the day, I noticed several unusual cars in the parking lot. Further investigation led me to find that a resident was having her bridge club over to play cards.

Some background: This particular resident redefines the word cheap. Ever since moving in, she and her husband are constantly trying to get something for nothing, like free meals for their guests. They actually were taking our newspaper every day so they wouldn't have to pay for their own subscription. They wanted us to pay for their moving fees. And on and on and on. So these people are the cheapest of cheap. The kind that takes all the pennies out of the "have-a-penny-leave-a-penny" dish at gas stations and goes through the dumpster behind grocery stores to get the expired food. That kind of cheap.

I began to hypothesize. Cheap Resident knew bridge club was coming over. She needed to provide what to her guests? SNACKS!! And....DRINKS! I'm sure she thought she really scored when she found the sleeve of styrofoam cups so that she wouldn't even have wash any glasses.

So, last night I tell Hubby my theory. He, being the voice of reason he is, reminds me that I can't really blame Cheap Resident without a witness or proof.

Proof? Incredibly, I was invited into Cheap Resident's home just this morning because the husband had fallen and needed help getting up. To try and avoid noticing he was wearing nothing but too loose tidy whities, I diverted my gaze elsewhere. And just what do you suppose I saw on the kitchen island?

Labels: case closed, cheap resident, mystery at the ridge, their kids told me they have piles of money...that's just wrong

Everything disappeared again overnight except for this: 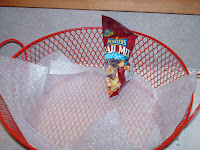 Labels: i'm onto something...the perp doesn't like trail mix, mystery at the ridge

The Mystery of the Missing Snacks

We have a snack bar. It is kept fully stocked of various goodies that on any given day might include freshly baked cookies, muffins, fruit, trail mix, or various bags of chips. As everyone knows, snacks are important, therefore the snack bar is always full of goodies. Always. Until this morning: 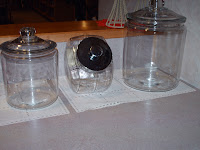 I asked WorkerBee why there weren't any snacks* this morning. With a raised eyebrow and and exaggerated whisper, she says "This happened all weekend. Every time we fill it up, in a little while everything is gone again."

WOO HOO!!! I am so excited I just did a row of cartwheels down the hall! I ALWAYS wanted to be Nancy Drew. And now, finally, 25 years after consuming every single Nancy Drew mystery story in the school library, I've got my very own mystery to sleuth. Snack stealers, beware.


*ahem...not because I was looking for a Monster Cookie or anything. I didn't even know there were Monster Cookies. Yeah, that's right. I was worried about the poor, underfed and snackless residents. How could there be no Monster Cookies, er, uh I mean snacks for them?!? What an outrage!
Posted by carrie at 1:46 PM No comments:

Labels: monster cookies...oh my, mystery at the ridge

“Most of us, swimming against the tides of trouble the world knows nothing about, need only a bit of praise or encouragement -- and we will make the goal. ”
—Jerome P. Fleishman

So far this week I have been ripped for using the word heck...yelled at for the dirt being dry in the flower pots (don't you know flowers have to be watered to live?!?)...snapped at about the color of dinner plates (wtf??)...growled at because someone thought they should have been served before someone else...had a crooked, old finger waved in my face because I won't do anything about the mysterious person who supposedly eats ice-cream out of a resident's apartment while she is away...and I had to make 30 s'mores because no one wanted to roast their own marshmallows. Not only didn't they want to roast them, but they wanted to criticize how I was doing it. Oh, and I had already worked all day.

BUT.... just now, a 96-year-old resident came into my office to tell me he thought it was really nice of me to build a fire and roast marshmallows for everyone last night. He also said "I know it can't be easy trying to make all us old people happy all the time, but you always smile anyway."

Ah. A little bit of praise goes a long, long way. Not to mention it's also really good to know that they think I'm smiling when I'm gritting my teeth! ;-)
Posted by carrie at 12:02 PM 1 comment:

Labels: just one reason i totally love this job

I was just preached a lengthy sermon by Righteous Resident for using the word "heck." Yes, you read that correctly. HECK. As in, when Righteous Resident asked me how my day was I replied with "Busy as heck." Seemingly benign, right?

Wrong. Apparently, heck is "just a Christian cuss word," and the Lord imparted it upon Righteous Resident's heart to take it out of their vocabulary over 40 years ago. Hmm. Missed that memo.

I guess next time I'll just say "I'm really fucking busy." And then spew pea soup all over my desk.
Posted by carrie at 11:24 AM 2 comments:

Labels: Beep beep...that's the bus to hell...here to pick me up

Last Friday it was time to suck it up and do the 20-mile training run I had been putting off since my IT band has been so crazy. It was a beautiful morning and the run was going pretty well. About 14 miles into it, Partner and I stopped by Rock Ridge for a pit stop. We were running right by anyway, and it was a convenient water stop(and as it turns out, a quick restroom break!)

I was wearing normal running attire...my fave Brooks shorts, a tank, and a hat. No one in the lobby recognized me. Which was fine, because obviously we needed to get in and out quick.

This morning a Resident stopped me and said she didn't realize that was me here on Friday morning. I laughed and said, "Well, you usually see me dressed up." To which she replied: "No, it was that you looked like a boy."
Posted by carrie at 4:42 PM 1 comment:

I was reading this hilarious post earlier today about unfortunate happenings that befall others, but happen to be pretty damn funny. You know, like that time in high school sophomore year when the late bell rings and you're nowhere near your study hall seat so you make a run for it but at the last minute your butt hits the chair and sends it sailing like a launched rocket clear across the cafeteria and you land flat on your back with the air knocked out of you in front of the very hot senior you were secretly wishing would ask you to prom and when you open your eyes not only is the entire room laughing but the wretched ass of a teacher is standing over you telling you "nice try, but I'm counting you tardy." Oh. Wait. That probably only happened to me.

This post asked readers about things that make you laugh...at the expense of others...which reminded me of flatulence (because farting is funny, dammit)...which then reminded me of Mickey.

Mickey was in her late 80s. When she was younger she had been a competitive speed walker, and she could outwalk anyone in the building. Not only could she walk faster than any little old lady you've ever seen, but she did it silently. You absolutely could not hear this woman walk. You could, however, hear her fart.

She had a habit of entering my office, in complete silence of course, and come to a stop right in front of my desk. I usually had no idea she was there, until her butt trumpet announced her presence. This tiny, 85-pound, silent walker could float an air biscuit that would even embarrass the men eating beans on Blazing Saddles.

I would be sitting at the desk with no idea anyone was in my office until she was right in front of me, and then she would let one rip. This happened EVERY SINGLE TIME she came into my office!

And every single time she came into my office, I had to hold my breath just so I wouldn't laugh out loud. WHY is this funny? What makes uncontrolled wind-breaking so amusing? I have no idea, but today I really miss Mickey. And that special way she could lean up one cheek and sneak.
Posted by carrie at 9:09 PM 1 comment:

Labels: just one reason i totally love this job, seniors DO the darndest things

Should I be embarassed, or flattered?

The CEO of our company visited today. Needless to say, a certain amount of stress is generated just in knowing the big boss is coming.

This is why I was holding my breath when Grumpy Resident introduced himself to CEO first thing this morning. One never knows what might come out of the mouth of a resident. It went something like this: "if you think you can run this place any better than her I'd like to see you try!" Aggresive, angry tone. Like CEO was there to fire me or something.

It could have been worse. Much, much worse.
Posted by carrie at 11:18 PM No comments:

Apparently a resident tried to sit in the wrong seat at Maude's table yesterday. Just to be clear, we still do not have assigned seats or tables. No, this makes no difference to Maude.

Maude looked right at the perpetrator and told her she couldn't sit in that seat. And just for good measure she added "you bug-eyed old bag!"
Posted by carrie at 9:53 AM No comments:

Labels: i hate to say it but she really does kinda have bug eyes, maude, oh yeah and she's 15 years older than the woman she called an old bag, seniors say the darndest things

That's what happens when two employees must take a sudden medical leave and two more quit. And a resident dies. And two more go to the hospital.

When I was growing up Mom would always quote "this too shall pass," whenever I was troubled about something. Yeah, it will. But when you're living it you sure don't think it ever will.

Can't wait to be back with something funny, cuz this sucks!
Posted by carrie at 10:26 AM No comments: