Not my Jovial Self

I have a confession to make. While the occasional flying fork makes pretty funny dinner conversation, and knowing and loving Gladys is one of my life's greatest pleasures....the Alfer Life isn't always shits and giggles.

Sometimes it flat out sucks.

It flat out sucks when someone has rheumatoid arthritis so crippling that all she can do is moan...or even worse....cry if someone tries to move her. It flat out sucks when my 102 year old has to stay at the nursing home because the heart attack that should have killed her didn't (and trust me, she's pissed about it).

And selfishly....did I mention SELFISHLY? It flat out sucks when someone falls in the middle of the night and I'm the only one who can go help. I like to sleep!! And when the phone rings at 3:54 a.m.....well, as I said, it flat out sucks. The ugly self-talk that follows my poor reaction pretty much sucks, too. No one is meaner to me than me. After I spent an hour holding the hand of an 88 -year old resident with the worst skin tear I've ever seen (I could actually see the fat under the skin, and it ended up taking 17 stitches to put her back together) all I could do is berate myself for being annoyed that my slumber had been interrupted. What could have been more important than being with and comforting someone in pain? NOTHING. Yet, I was annoyed that I had to drag my selfish ass out of bed and drive the 2.2 miles from my cozy, warm bed to Rock Ridge at the ungodly hour of 4am.

Current Status:
The bad:
I'm exhausted. (Did I mention the phone rang at 3:54 in the freaking morning?)
I'm racing tomorrow.
The weather forecast is lousy.
My IT band is killing me.
I wish I wasn't going.

The good:
I spent an hour this morning learning things about a resident I never would have known had I not had the opportunity to sit with her.
I've had two glasses of wine.
My TrueLove (aka hubby) is making me cheese crackers as I type.
It's Friday.
I'm racing tomorrow.

Oh, and this Foto Friday picture: 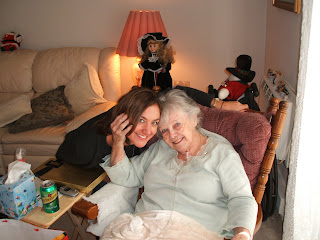 This is my "Grammie D," Ellie D'Ambrosio. This picture was taken last December in Boston. She died in January.

I do miss her...but I visited her faithfully at least once a year from the time I was able to scratch together enough dough for a plane ticket, up until she was diagnosed with the lung disease.

We were all good.

What more could you ask for?
Posted by carrie at 6:37 PM 8 comments:

Labels: photo fun, tgif indeed...its been a long week at the ridge, who's meaner than me?

I hope I don't jinx anything by saying it appears the dreaded treadmill season is over! Thank goodness, as I was starting to have doubts about running a spring marathon. Anyway, it was 65 glorious degrees here today...perfect for a 10.2 mile run. I also did 6.8 on Tuesday and a quick 2.2 speed/hill work out on Thursday. Not quite 20 miles this week, but that's ok since I'm racing a half next weekend.

My pace this week consistently hovered between 10:40 and 11 minute miles. I'm always a slow runner, but usually not quite that slow. I'm not sure what that is...maybe just getting used to being outside again? I'm also struggling with a tight IT band. Again. That's such a bummer, because I felt certain taking two months off after the Portland Marathon would help straighten that sucker out. I guess maybe I should have kept going to yoga, or at least been a good stretcher at home (I wasn't.)

That's the update from here!
Posted by carrie at 8:43 PM 5 comments:

Labels: running, weekends are too short

YAHOOOOOO, it's Friday!
So far in the hour I have been here today, I've been asked to fix broken dentures (uh, gross!), the slippers have shown back up (she's still trying to figure out the holes three months later!), Joseph is desperately searching for his wife (who died ten years ago), and Gladys is mad as hell at the "quack" who sold her the new glasses that makes everything look blurry. She thinks I'm crazy when I tell her it takes a couple days to get used to new lenses and claims she is going to get her old glasses back "if I have to walk to the junction and get them myself!" It's shaping up to be another awesome day here at the Ridge! :)

Onto Foto Friday! Copying the logic of so many other great bloggers, here is my third folder, 20th picture: 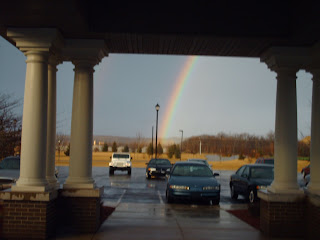 I took this picture out the front door of Rock Ridge about a month ago. A rainbow in February is a pretty unusual site around here, and this was probably the brightest rainbow I've ever seen. It was such a random moment of joy for all of us...residents and staff...young and old alike. It was fun to stand in the door and marvel nature together. As we were standing there beholding, a 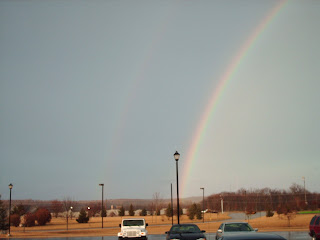 second, much lighter rainbow started to appear. If you look really close you can see it to the left of (or above) the bright one in this picture. Awesome!

(And isn't that little white jeep the cutest? I can hardly wait to take the top off.)

Gladys is celebrating her Irish roots today by wearing one of these around her neck:

Apparently she couldn't find anything else green.

Labels: gladys, just one reason i totally love this job, these people crack me up...daily

Last week Rock Ridge hosted our company's regional training, so we had ten people from all over the US hanging out with us and enjoying all that our small town has to offer, which isn't a whole lot. Hosting is exhausting, and mega time consuming, but the upside was the valuable training and the reaffirmation that I work for an incredible company. It's awesome to spend time with such positive, uplifting, and creative people....all of whom really love old people.

Everyone also claims this industry has been (and will remain) unaffected by the state of our economy. I have to wonder how that is possible, but that's what the experts are saying...so I'm going with it.

In Resident news: My little 102 year old had a heart attack. She wouldn't get out of bed and told the WorkerBee to "go away and leave me alone so I can die today." Well, she didn't die...quite the contrary. She's recovering quite nicely and should be home soon. Incredible.

Gladys claims some shyster came to Rock Ridge and took her picture, charged her $75 for the photo, and never delivered it. I'm guessing something like this actually happened to her at some point in her life, but it totally cracks me up to hear that little sweetie use the word shyster like it's the queen mother of all dirty words.

Maude threw a WorkerBee out of her apartment over the weekend. Maude's family has asked that we give her assistance with bathing, but apparently Maude disagrees that she needs help. She told WorkerBee "I'm getting ready to turn 98 years old! Don't you think I know how to have a bath!?" She has a point.

In Running News: Even with all the company we had last week, I still managed to have a 24-mile week, with half of that mileage coming from a 12-miler on Saturday. The weather looks as though it will be cooperative for some nice runs this week, too. I spontaneously registered for a half marathon on the 28th (Hubby always runs it as a Boston trainer), it's a tiny little race...but should be a great training opportunity. I'm excited about the possibility of this race helping my performance at the Mini on May 2. I've never run a half before the Mini, so I'm hoping it speeds me up a bit. I'd sure love a PR....

2) Part of the 5K course runs the same course as the women's olympic marathon trials last year, which Hubby and I were so lucky to get to watch on the Sunday before the '08 marathon. I think there is something reverent about running the same streets as Joan Benoit Samuelson, not to mention the best women marathoners in our country.

3) I'm running a race. In Boston. The day before the oldest marathon in history.

4) I should run a PR. This is simply because I have only ever run one other timed 5K, and I'm thinking the excitement of running on Commonwealth, turning onto Hereford to finish on Boylston Street is pretty much going to carry me faster than a stinkin' 29 minutes, which is the time of my only other 5K.

5) I will actually be running a race all by myself with Hubby as my fan! This NEVER happens. Because we both run, we're usually both, well running. He's running the marathon on Monday, so had no interest in the Sunday 5K. (Pussy.)

6) Have I mentioned finishing on Boylston Street? At the marathon finish??? As if that isn't enough awesomeness, the finish is only a handful of blocks away from my most favorite breakfast spot ever. There will be a plate of lemon ricotta stuffed challah bread french toast with my name on it. And don't even think about forgetting the blueberry coulis topping. (and for once, I'll have actually burned a few calories before consuming a bajillion)

I am totally thrilled to be a participant in the Inaugaral BAA 5k, and have already started to interject things like "I sure hope I'm ready for Boston in April" into my daily conversations. You know, just to sound cool.
Posted by carrie at 9:06 PM 7 comments:

I was helping get the breakfast service started when two male residents walked in together, exchanging morning niceties. Suddenly one of them stopped short and said, "Oh crap! I forgot my teeth."
Posted by carrie at 7:43 AM 4 comments: