Where did the week go!? I can hardly believe it's Friday already. This week at the Ridge has been annoyingly busy, but unfortunately (or maybe fortunately?) it's been busy in a mundane kind of way, rather than a someone-put-poop-in-the-garbage-disposal kind of way.

Tomorrow Hubby runs what will hopefully be his Boston Qualifier (send good running vibes!) I'm taking my bike and plan to cheer him on at as many mile markers as possible. He's awesome, and because I think so, today's pics are all about how much fun we have.

This is us having a picnic at a park last summer. I set the timer on the camera, put it on the picnic basket, and here we are! We're such dorks, we take pictures of ourselves all the time. 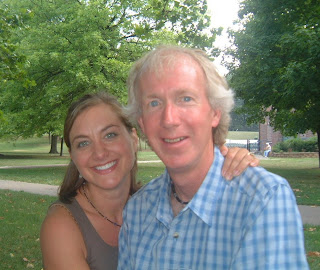 A few years ago we took a bicycle trip through North Carolina, which was fantastic! I think we were on Ocracoke in this picture. 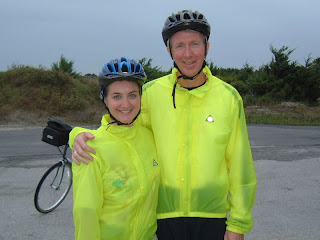 We have been going to Boston for the marathon for the past eight years. Hubby's birthday is on April 19th, which means we are always in Boston for his birthday. (Once the marathon was even ON his birthday.) Three years ago for his birthday, this wonderfully awesome and thoughtful wife actually scored some Sox tickets. The reason I'm so wonderfully awesome is because they were playing the STINKIN' YANKEES....which happens to be Hubby's favorite team (his only flaw I've found so far). I even let him wear his STINKIN' YANKEES shirt!!! (Luckily it was cold and he had to wear his jacket. Hee!) Anyway, here we are with the Green Monster. Here we are in Chicago in 2003, the morning before my first marathon. His sister is on his left and that is a friend of ours on the far right....he had helped the three of us train and get through that first marathon. Our time was 5:55!!! His was something like 3:20. See why I think he's so awesome? 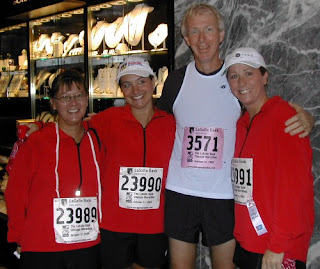 And speaking of running! My 21 miler went well. Slow, but well. Knees are feeling better and I'm starting to feel the anxiety of knowing I'm running a marathon in two weeks. 13.6 on the books for tomorrow, after Hubby qualifies of course!
Peace and happy running!
Posted by carrie at 12:29 PM

Best of luck vibes coming your way!
Have a great weekend!

You guys are TOO cute! Good luck to Hubby BQing.

Hey! Teh Heisenbro's birthday is April 19, too. He just turned 50! (I got another year before the Big Five-O!)

Good luck with your runs and your marathon.