I'm sure it's easier for me to say I love the marathon because I've never had (and never will have) the opportunity to torture myself on hill after hill from Hopkinton to Boylston Street, but being in Boston during marathon weekend is amazing. That city absolutely comes alive for this race. The atmosphere of the city is incredible, and the support of the marathon runners is unlike anywhere else we've ever been. This is the seventh time Hubby has run Boston, and every year I feel the same way. It's incredible.

Friday we flew out on such an early flight it shouldn't have been legal, so we were in Boston early enough for breakfast. We went to one of our favorite breakfast spots on Newbury, traipsed along checking out Niketown, people, and the flagship Life Is Good store until we had wasted enough time to go to the Expo. I always enjoy the Expo...but this year I got to pick up a packet and a race shirt, too! (Any race that lets you try on your shirt to be sure it fits = awesome. I have more race shirts that don't fit than Carter has liver pills....whoever Carter is...) 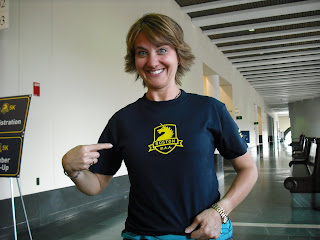 The Expo was fun and great. We saw Bart Yasso and Frank Shorter and met Kathrine Switzer who was putting the hard sell on us to buy her book, but my favorite part of Friday came later as we were walking back to our hotel and we ran into her on Boylston Street: 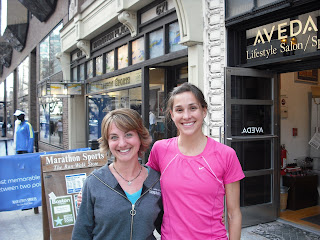 Kara Goucher is a class act. She was so nice, down-to-earth and personable. She even asked Hubby if he had any course tips for her since he'd run it before!

Sunday was the 5K and just like you could expect from a BAA race, it was the best race I've ever run. It was a bit too crowded to run very fast at the start, but other than that it was fantastic. Running through the streets of Boston and finishing on Boylston at the marathon finish line was just damn cool! All the finishers got medals, they announced names at the finish line, and the snacks were great. Oh yeah, and I got that PR. 27:55, a flat 9-minute mile pace. Yippee! :) 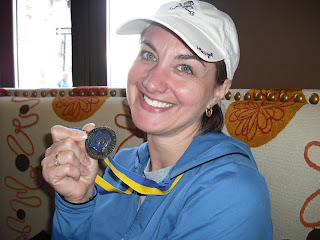 Monday was a blast. I walked Hubby to the Common and waited with him until he boarded the bus for Hopkinton. About 10am my cousin (who lives in Cambridge) met me and we took the T to the 16.8 mile mark in time to see the elites racing. Amazing! After they ran by, we passed the time cheering and clapping and anxiously awaiting Hubby. All of a sudden he was there! He looked great and threw us his gloves and some kisses. I tried to get a picture of him, but I was too excited....so here's my cousin while we were waiting for him. Isn't she adorable!? We had so much fun. 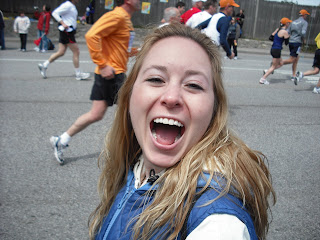 As soon as he passed us at that stop, we took off to the T and made it to Cleveland Circle (about 21.5 mile mark) with about ten minutes to spare. He still looked great, even though he had just come off of Heartbreak Hill. After he passed, we ran back to the T and were lucky enough to have a train waiting, so we made it to Commonwealth Ave just in time to watch him turn on Hereford. His gait had changed considerably and he looked exhausted, but he was still smiling and blowing kisses. He's the one in green (with his head blocked by the tree branch!): 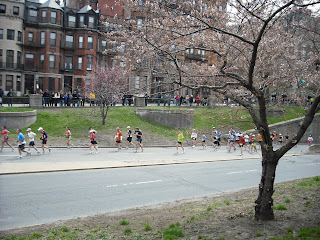 Afterwards, we met in the Public Garden. I think he looks tired, but happy! 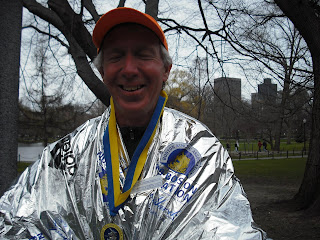 Of course as the evening passed, he couldn 't help but dwell just a tiny bit on having missed re-qualifying by 4:02. He has already started checking out fall marathon options to remedy that.
Has anyone ever run Philadelphia or Richmond? Sounds like we get to go on another trip....
Posted by carrie at 5:20 PM

I lived in Boston for 2 years for grad school and it was such a fun city.

I spectated the marathon 2 years in a row from my apt at mile 23.

So cool you ran into Sara Goucher!

What a great report!!

The only bummer is that I'm going to be in boston THIS weekend and not LAST weekend when I could have cheered you on. Oh well. Glad you guys had such a great time! :)

Congrats on the great run, cuz. You are so cute, I love your hair! And congrats to Lance for finishing. He is The Man.

Love and miss you - YFC

Congrats to you on the PR, sister and mega-congrats to the hub!

This was an all-around enjoyable report! I'm glad you had such a good time and good luck to your husband in re-BQing!