TGIF and Why I'm MIA

This week at the Ridge we've had pneumonia, suspended employees, stinky residents, stolen coats (that damn Naomi), the police, a resident thrown out of the courthouse, phone calls waking me up at midnight, a confused resident walking into the wrong apartments, and a power surge resulting in about 15K worth of damaged electrical equipment. I'm exhausted. And so ready for a drink. Or ten.

On to Friday Foto Fun. No science was used in the choosing of this photograph. I opened a file and clicked wherever the cursor already was. So here I am! That's me with a full belly of awesome sushi. Shino's is a tiny sushi bar (really tiny...I think there were like eight or ten seats in there) on Newbury Street in Boston. I am holding a Marathon Sports bag...I did a little shopping before the sushi treat! I love Boston, and we go often because my family is there. We also go every April because my husband rocks and qualifies to run the marathon. I've gotten quite adept at being the ultimate Boston Marathon fan using the T (Boston's subway system) and some leg power, so if anyone ever needs advice on how to maximize the number of spectating spots, just let me know! 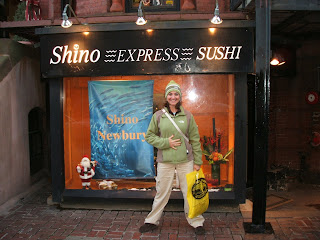 Labels: photo fun, tgif indeed...its been a long week at the ridge

are you wearing big-wall climbing pants? the ones where the legs snap apart so you can poop while you're in your harness?

Hehe, I lived at mile 21 of BM for three years. It was awesome!

Sorry about all the work drama.

Tell the truth: Is The Ridge a home for retired mafiosi? Because that first paragraph kinda resembles a police blotter.

I hope you had that drink. Or ten.

Jeff: They aren't rock climbing pants, but I wish they were. Pooping without pulling 'em down sounds cool.

Glavester: Mafioso? That made me laugh out loud considering the high volume of wholesome prudes living at the Ridge. I do have to admit, though, this week did resemble a police blotter. I often think I should be writing a book, not a blog I can't seem to find time to keep up on. :)

Wow, that is a lot of blogging material - why the police???