But.... I thought this sounded like more fun, and I have no idea what I'm going to find here in a minute when I open the file. (Lends an air of great excitement, no?) So, from P.O.M via Chia, two of the cool people/runners/bloggers I met while in Portland this fall, here is the alfer life's Friday Fun: 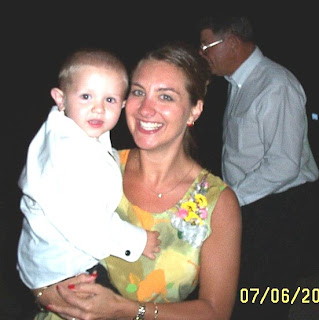 Awww! He's so darn cute. This is my nephew Noah (my sister's son), who is now 8. We were dancing at my brother's wedding reception. Noah was the ringbearer in the wedding. Their wedding colors were camo, hence my dress. That's my uncle in the background, busting a cool move. I believe this picture was snapped after the bride and groom "cut the cheese" (cheesecake instead of wedding cake, but there were also whoopie cushions involved), but *before* my brother started stripping to Saturday Night Fever on the dance floor as my sister and I collected (and wore) the cast-off tuxedo clothing. Not that too many people noticed, because most of them had consumed entirely too much of the keg. A picture really is worth a thousand words, huh!?

I tag anyone else who wants to have a little Friday Fun!

Labels: meme, so glad it's almost the weekend, the neck kiss made me feel a little weird

Very cute pic.
I heart going to weddings (not being IN them, but going to them).