I'm really not too superstitious or into astrology...but I do have to admit that there is something to that full moon stuff. We've had a special kind of crazy going on the past few days. Like residents asking us to help them "get their bowels out," or confused residents talking about how confused other residents are, or the guy who showed up to supper soaking wet and acted like he didn't even notice. Oh, and how can I forget the potential resident whom I met for the first time this week? I knew her for five whole minutes when she proceeded to tell me all about the man she was married to for 20 years before he decided "he liked the boys," and continued to refer to him as "the queer" for the rest of the conversation. Oy.

Then we have Little Miss Chatterbox, who has taken to wearing the lab coat daily. I heard someone ask her if she was a pharmacist. (They were serious.) Gladys thinks Naomi has been taking her teabags while she's out of the apartment. 98-year-old Maude tripped and fell. Before I could even ask if she was alright she threw her cane and purse and yelled "Damn it all to hell." Apparently she was still mad later. She dumped her salad on the table at lunch because the man she was sitting with didn't want one. I guess she doesn't like eating alone? There's more, but I need to cut it short because I can hear Joseph coming (his walker wheel has a distinct squeak) and he's going to want to know about mass. Again.

Here's my Friday Photo! I'm eight years old, and on the left (as you look at the screen, Big Bro. Or the right, if you turn your back to it. Geez.) 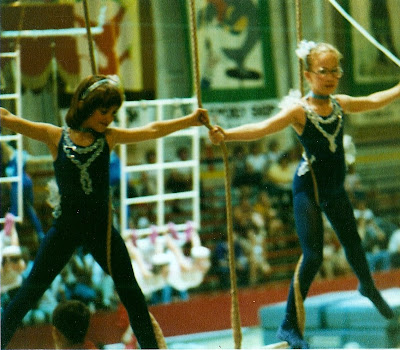 I ran twice this week. Next week will be even better. Happy weekending!
Posted by carrie at 9:10 AM

you know those instances don't sound any more crazy than the normal stuff you post.

i hope the "queer" lady ends up being a resident. she sounds brilliant.

oh, and by big bro, i'm assuming you mean gavin.

i'm going to dump a salad on the table in honor of that crazy chick, then blame the full moon.

my horoscope is right too often for me to ignore. it's wrong sometimes too, but it's still cool to see a prediction come true. now it says i'm going to get another job offer on the 18th, and I hope that's right.

Like residents asking us to help them "get their bowels out," ...

Serves you right for not shelling out the bucks to get that poop pump fixed. I warned you it would come to this.

Speaking of poop pumps ... jiif's deductive reasoning skills are amazing (hip), aren't they? Somebody buy that man a shift key for his keyboard!

I knew you weren't the blonde, little sis. Carnies are never blonde.

Bahahaha... god I love your stories!

HAHAHAH!!! I love old people :-) Good to see not much has changed! You're so damn cute!