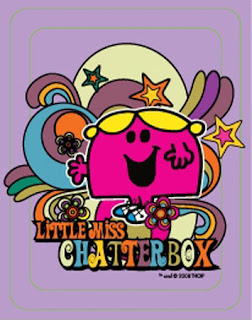 Things are always busy around Rock Ridge, but every once in awhile it gets so hectic that I actually have to do some work. Like this morning. I had to drag my sorry (and tired) butt out of bed early enough to help serve breakfast to the inmates, which required me to arrive an entire hour before I normally do. Assistant likes to point out that I actually willingly get up earlier when I run in the mornings, but she isn't the boss and I'll complain if I want to.

I really don't have too much to complain about, though. Serving breakfast is a riot. You've got the people who forget their teeth, the people who are so hard of hearing that when you walk away from the table they talk about you SO LOUD everyone in the dining room hears it, and then you've got Little Miss Chatterbox (thanks for the perfect name, T!) As soon as I hit the front door I could hear the screechy whine of her voice. She was a constant stream of chatter the entire time I served juice and coffee. She was still talking as I started serving plates. Keep in mind, this is mindless chatter...she says absolutely nothing! Just talk, talk, talk. I was clearing plates when suddenly, I noticed....no screechy voice! What!? This woman has NOT SHUT UP since she moved in!!! And the dining room was QUIET?! Somewhat surprised, yet altogether curious I asked her table if anyone needed a refill of coffee. As she responded,* the three men at her table all burst into laughter. One of the men pointed at his watch and said "You didn't even make it five minutes!"

Apparantly, Little Miss Chatterbox said she could be quiet for eight whole minutes, and one of the men didn't believe her and challenged her to prove it. Obviously she fell short of the goal.

As I walked away from the table, I finally heard her actually say something of content.

"Whoever is in charge here sure does a bang-up job! These girls around here are just so nice! Like that one! I don't know how they find such nice girls." Apparently she thinks I just serve breakfast. I think I'd like that.

*A Little Miss Chatterbox response is NOT a typical "yes, I would like some more coffee" or "no thank you." Instead it is more like "you know, I've heard it's good to put coffee grounds in garbage disposals. I think I should try that. Can I gets some coffee grounds from the kitchen? I used to put coffee grounds in the garden. I'd save them in a can and then put them right into the dirt. That grows beautiful flowers. You know I can't believe the peonies aren't open yet, seems like they should be since it's almost Memorial Day. I guess we're having a cookout on Memorial Day. I hope there's hotdogs. I love a good hotdog. That reminds me of when... What did you ask me?"

Hitler - one of her obsessions ... in one step.

She can do it, sister!

(Ironically, I had a cup of coffee this very morning that was so bad, it was WORSE than Hitler. Well .... close. But don't tell my sister! Hahahahahaha!)

@gavin i think you need to start footnoting your comments, too.

i have a strong suspicion that lmcb is going to be a regular character on this blog. i'm glad you started tagging your posts with her pseudonym.

haha, that's a good one.