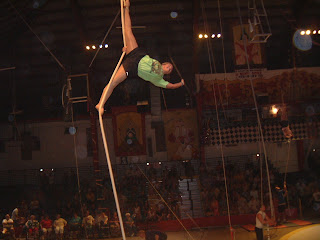 Our internet access has been down at Rock Ridge (how do they expect me to get any blogging, er, uh work done!?), so today's photos are sponsored by my home computer. Sarah, these are for you! 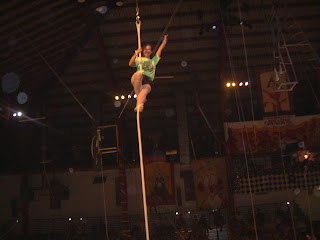 I live in a town that has an amateur circus, in which I began performing at the age of eight. It is an annual thing, with one week of shows every summer. I performed in various acts every summer until I was 19. I, being from a tiny midwestern town, was so worldy at the age of 19 I 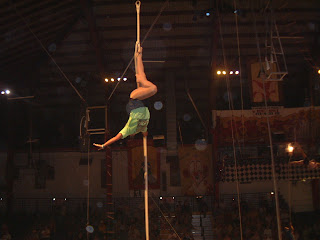 thought it would be a great idea to "go professional," as us amateur circus kids call performing in a "real" circus and actually being paid for putting ourselves in peril 35 feet in the air. I layed off a year from college. I performed for awhile at Knott's Berry Farm in California, and then moved to Florida and performed at Cypress Gardens. After the show in Florida folded, I performed one summer with a tent show that toured Indiana. As glamorous as that sounds, one night as I took off my elephant-stinking fishnets in the front seat of my Ford EXP as the old fryer oil from the corndog stand hung in the thick summer air I decided it would probably be a better idea to finish college. So I did. End of glamorous circus career.

These pictures are from July of 2007, when our amateur circus hosted an Alumni Show in which past (aka OLD!) performers put on the show. This is me doing Spanish Web in that show.

I'll have to see if I can find some old pics from the tent show, because that would be highly entertaining some Friday. Ah, the circus life.

Hmmm...I just contemplated this irony: my current job could be considered a circus, too...only now I'm the Ringmaster and most of my performers are sideshows! :) 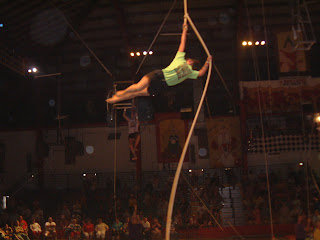 holy shit, carrie. who knew you were a death defying daredevil??!? cool pics.

the theme going around right now seems to be prom pics. i like the way you buck the trend. but that doesn't mean you should be afraid to push an embarrasing prom pic up there.

ZOMG, little sis! You're a Carny!

Wow, and from the looks of these pix, a talented Carny, too! Impressive!

So we won't be seeing T. Chapin this weekend because there's a conflict with this fishing (ugh!) tournament that Ian's making me take him to at 8 a.m. on Sunday. And it lasts god knows how long. HOURS!

I'd rather be at the concert.

I don't know why or how.

I prefer "Showgirl" over Carny, even though I did have to help sell the disgusting corndogs before the shows because the circus owner lady was such hag and I was scared of her. (Her name was Elizabeth and everyone on the show called her Elizabitch).

Just to be clear, I do still have my original teeth.

from one circus to another, it seems to fit you. i think if you'd stayed at the big-top, the stories and characters you'd end up posting about would be roughly the same as the ones you post now.

And did you read Water for Elephants? Because now I'm going to imagine you in that book!

I didn't know you were circus folk! That is so awesome (I would never call you a carny, I had a cousin who was a carny, and I know the difference).

Crazy things about people you never knew. I have nothing that interesting in my past - or present. BUT, I do have a little Carrie Corn! And I will post a picture of it next week (I think Carrie will not be culled, so you're safe).

I loved Water for Elephants! (It was well-researched and accurate from both the circus AND the assisted living perspectives.) It's amazing how many people have mentioned that book to me. Funny!

found your blog through nikemom...wow, that is amazing that you can do those stunts, for free nonetheless...enjoyed reading some of your posts!

Ummm...I do believe you did neglect to mention the "Best Circus Band in the Land" for which you were also a part...and..."May All Your Days Be Circus Days"!!!