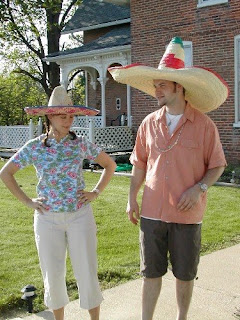 A little late for Cinco de Mayo, but how ironic that this picture would be the 8th one in the 5th folder. This is my little bro and I celebrating some past Cinco de Mayo, although by my apparel one might surmise I thought it was Aloha de Mayo... or something. At least I was being festive with the uber-cool lid, but I think really I was just pissed that P.J.'s is bigger. (He has *always* been mom's favorite!!)
The folks at the Ridge have been unusually quiet this week, unless you count the lady who insists rainwater is getting underneath her house...which is causing high humidity on the inside...which is making her nose "run like a faucet," and no matter how long I talked to her she still can't seem to understand her home is built on a SLAB and there is no freaking basement, and even if there were why doesn't she just buy a dehumidifier already?
***
Gladys is having trouble with that pesky Naomi again (reminder: Naomi and Gladys were roomies, until Naomi died last year...which Gladys can't seem to remember). Gladys was in the lobby, overwrought and upset, telling Assistant and I that Naomi has been sneaking into her room while she's at lunch, laying down in Gladys' bed and having the nerve to leave withouth re-making the bed!! She is seriously worked up about this... so upset I think she might make herself stroke out, or at least vomit.
Well, this same day I had a procedure on my eye that left it really swollen and red, so Assistant teasingly tells Gladys that she'll take care of Naomi, makes a fist and punches it into her other hand. "Just look what I did to Carrie when she made me mad," Assistant said to Gladys as she pointed at my puffy eye. Instantly, Gladys goes from totally upset and wringing her hands in despair to the quick-witted little love with Alzheimer's that makes me want to take her home, and says "Hon, you better stay away from her. She beat me three times just today."
I'm continually amazed how sharp and witty Gladys can be when she can't remember Naomi is dead, has no idea what year it is, and thinks she is on vacation at a resort rather than living at an Assisted Living. She's the best.
Posted by carrie at 9:30 AM

oh that's a heartwarming and touching story. i love beating old people! kidding. i usually get glaven to do the dirty work for me. how funny!

We all need a little "Gladys" in our lives! Sweet story....love them old people!

I need to get me one of those lids.

And Gladys. What would life be like without her?

OMG - is Gladys aware that she's got an active fan club online? That if she told us to, we'd kill for her - even Naomi, if she weren't already dead?

Ian, Teh 'Bride & I are going away this weekend, starting in about 3 hours and I won't have a chance to visit Teh 'Dad and now I'm feeling guilty because of you and your Gladys stories, Lil Sis!

And thanks for the Tom Chapin information (that was YOU, right?). We live maybe 8 miles from where he'll be playing and I think we might be able to go. (Have to ask Teh 'Bride because I NEVER know what we have on tap for a weekend till it hits us because I never listen. I have a 5k that weekend, but it's on Saturday.)

By the way, Harry's "Cat's In The Cradle" was another song (along with JL's "Beautiful Boy") that I used to listen to back in 2000, when we found out we were getting Ian - to get myself all sentimentally weepy! I guess I was looking forward to being an absentee Dad even before I was a PRESENT Dad! Hahahaha!