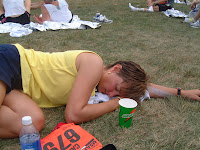 Those are the only things on my body that do not hurt today. Which kinda bums me out...because I trained well. I trained really well. I wasn't even SORE after my last 21-miler. What I did not do, however, is train on any hills (things here in the Heartland are rather flat, after all). If anyone ever tells you that United States Air Force Marathon isn't hilly, punch them in the neck for me. Thank you.

I guess besides the hills (and what running on those hills did to my poor and unsuspecting body), this was a terrific race. The pasta dinner was fabulous. It was staged in the National Air Force Museum with the tables set up right there among all the aircraft. Bart Yasso spoke and showed slides from all the crazy races he has run. Also sharing his experiences was this most amazing man who I was lucky enough to actually see running tethered to his guide the next day during the race. Talk about inspiration.

The fly-over of the F-22 Raptor fighter planes at the start of the race defies description. It was incredible. Really seriously awesome.

The race itself was very organized, from the parking to the shuttle that took runners (and their fans) to the starting line to the aid stations located at every mile on the course. Service men in their dress blues put the medal around your neck at the finish line. Very cool.

It took me 29 minutes and 38 seconds longer to do the second half than it did the first half. Unbelievable. Even more unbelievable is that at mile 20 I was still on pace for a 4:45. Which means I totally blew 20 minutes during the last 10K. How does that even happen? When I write it down it seems disappointing. But I'm not disappointed.

I used every last bit of energy reserve and gave it everything I had. I ran with a hip that felt as though it could have been dislocated (did I mention the hills?) for 16 miles. I pushed through. There was unquestionably nothing left at the finish line. I did the absolute best that I could do on that day and I'm proud of the accomplishment.

Besides, it isn't about the time. It's about the journey in getting there....and the experience you make it once you arrive. I ran this marathon in honor of my Dad, a former member of the United States Air Force and a man who underwent multiple surgeries, chemotherapy, and radiation last year. I am so proud of him for being the toughest person I know. And for a little while yesterday, I felt almost as tough as him. 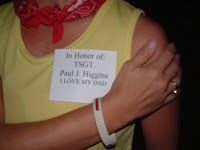 perfect perspective! it IS all about the journey. finishing, in and of itself, is nothing to sneeze at. laughed at the pic of you sleeping after the race and the pace band on your arm.

Well...to be truthful...I wasn't sleeping. I was trying not to throw up! (I'm happy to report I succeeded and no tossing of power gels took place.)

have i mentioned that you're a rock star? very proud of you! maybe i'll get off my butt again one of these days!!

Hey! I'd love to meet up. Are you doing the proposed "drinks night" POM posted about?

I hope so, but am unsure about logistics(we're flying in on Thursday). I really enjoy pacing with someone, so I hope it will work out!

Wow - you are one tough cookie. And you're gonna do it AGAIN in 11 days? Are you out of your mind?

We are flying in on Thur too. Staying in hotel downtown. I will let you know what we decide. Lots of bloggers around -so fun!!!

Great job and don't be disappointed! Your body will totally tell you what you need and although we always want to race with our A-face, sometimes things don't always work out that way.

Yes. Yes, I might be a little out of my mind. Still not sure if I'm going to run or take it easy and run/walk, that depends on how quick the legs recover (still sore!) We are staying at the headquarter hotel, also downtown. Would be fun to hook up!

Oh my goodness! You hardcore runners astound me! Congratulations!

Carrie, you are awesome! I only run if someone is chasing me.

Hugs and lots of love,